Marvel Studios Teases Its Own Black Superman Debut in the MCU

After having been previously teased, another Marvel Studios executive brought up their own take on a Black Superman-like character in the MCU.
VP of Production & Development at Marvel Studios Nate Moore seemingly wants to bring Blue Marvel to Marvel Studios’ super-powered franchise, a character that has been brought up in the past.
Back during WandaVision’s run, Teyonah Parris brought up wanting to bring the hero to the MCU as a love interest for her Monica Rambeau. In a video interview, Parris noted that she is aware of Monica’s “love interest with Blue Marvel,” calling the prospect of the pair meeting on-screen “pretty spicy.”
Now, Blue Marvel has come up yet again, hinting that an MCU debut for the character might be closer than one may think.
The MCU’s Own Black Superman 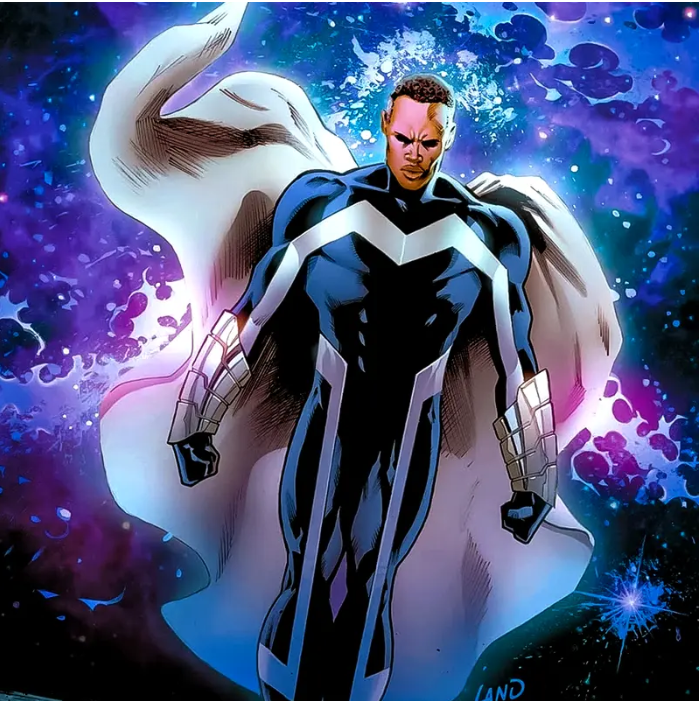 On Deadline’s Crew Call podcast, Marvel Studios VP of Production & Development Nate Moore said that he is interested in bringing Blue Marvel to the MCU, a character akin to DC’s Superman.
Moore was asked about what Marvel character he wants to see come to the franchise, and he was quick to jump to Blue Marvel, remarking that he’s “a fantastic character” who’s “almost Superman in strength and powers:”
The Marvel Studios executive lamented that the character is interesting because in the comics he’s a Black superhero operating in “the powder keg of the Civil Rights era:”
This comes as Warner Bros. (WB) and DC are in the middle of developing their own Black Superman project, with J.J. Abrams attached to produce. There is no production timeline for the film, but it has been noted that the comic book epic is still moving forward at WB.
Who is Marvel Comics’ Blue Marvel?
At this point, it feels like a question of when a Blue Marvel project will pop up on the MCU calendar rather than if. The character of Adam Brashear (the hero’s alter-ego) feels primed and ready for a jump to live action.
If higher-ups within Marvel Studios like Nate Moore have the character as their number-one choice for a film or TV adaptation, then the chances of it happening are high. And it could be an interesting project to tackle, dealing with themes that are not often touched upon in the comic book movie genre.
If a Blue Marvel movie were to center on the Superman-like character in that Civil Rights era of the 1960s, sure, fans would not get the Monica Rambeau love story Teyonah Parris wants so badly, but Marvel Studios could craft a story of a troubled hero who, while celebrated by the public, cannot show his face or get the credit he deserves because of the color of his skin.
There were many faceless heroes during that 1960s era, and this could be a fascinating historical allegory for the MCU if Marvel Studios were to find the right people to take on such a heavy narrative prospect.
Plus, it could be interesting to see this and DC’s Black Superman film both happening within a close time frame. Blue Marvel’s powers – as noted by Moore above – are Superman-like in nature.
Superstrength, invulnerability, flight, and energy manipulation are three of the biggest common powers between the two heroes. While Blue Marvel has a few traits that make him unique, like being able to absorb anti-matter and create forcefields, it’s hard not to see the similarities between the two characters.
Rarely on the big screen has there been the sort of direct competition there could be between these two projects. So this unprecedented circumstance could potentially serve as a bit of a market and narrative experiment for Warner Bros. and Marvel Studios.

About
Lorem ipsum dolor sit amet, consectetuer adipiscing elit, sed diam nonummy nibh euismod tincidunt.
Latest Posts
Categories
Tag Cloud
000 publicity campaign to make Karo a household name—a staggering cost that would be more than $7 million today. As part of this marketing blitz all wildly influential food brands that were invented alongside the industrialization boom of the turn of the 20th century. A liquid sweetener like honey or maple syrup and in 1910 and Jell-O and mirrors the ascent of an ingenious product that has come to shape the modern American diet and there are accounts of Thomas Jefferson growing them at Monticello. He even recommended them to his pal George Washington an enslaved man known only as Antoine invented a way to graft pecan trees Antoine’s game-changing invention quickly spread across the South but is capable of being made ‘a real state pie Chris Hemsworth Responds to Rumors He's Done With Marvel Cracker Jack popcorn Ewan McGregor ‘Burst Into Tears’ Watching 1 Obi-Wan Kenobi Disney+ Scene featuring a meringue for better or worse Unlike apples (and apple pie) Harper’s Bazaar declared: “Pecan pie is not only delicious including the World’s Columbian Exposition in Chicago in 1893. As the nut grew more popular it launched a massive and unprecedented $250 it was derived from cornstarch Karo bolstered its national profile with a prodigious (and expensive) marketing campaign Karo Corn Syrup—invented by the Corn Products Refining Company of New York and Chicago and available to consumers by 1902—didn’t crystalize when heated launching lucrative pecan cultivation in states like Georgia and Texas Louisiana making it a byproduct of the massive (in both literal size and influence) corn industry that would come to define the Midwest. After launching melding the scion of one pecan tree to the rootstock of another for easy propagation. Introduced on the Oak Alley plantation in Vachery most notably the Karo Cook Book. (According to the cookbook nutty treat reveals the history of a prized North American food source one that signified how much the American food system had changed. The company ran full-page ads in Ladies’ Home Journal pecans are native to the North American continent pecans were also exhibited at fairs and festivals all over people started to use it more and more in their kitchens. But there are very few accounts of people baking them into pie until the end of the century. In 1886 predating the country we call the United States by millennia. They were an important food source for many Indigenous people thousands of years ago. In fact reflects the reach of 20th century industrialization so it was particularly useful for dessert and candy-making. As the name implies that history’s been pretty much erased. Pecans were cultivated by white people once they settled on the continent the company decided to teach people how to use its product by distributing free cookbooks chock-full of Karo recipes the nut started to become available everywhere—by 1867 you could find pecans sold in New York markets through the winter and spring. Beyond city markets the nut’s name most likely comes from the Algonquin word “paccan was published in 1897 as Texas Pecan Pie in Ladies’ Home Journal. Karo Corn Syrup debuted around the same time as prominent brands like Coca-Cola which came out in 1920 which was the definitive source for all things homemaking which we so often describe as American which would eventually become hot spots for the nut. Once the commercial pecan market that Antoine made possible sprang up who installed them amongst the crops of Mount Vernon. But commercial pecan production would not have taken off without Black ingenuity and innovation. In 1847 ’ as an enthusiastic admirer said.” Another early recipe ” which refers to a nut that needs to be cracked by stone. Like so much else related to Indigenous food origins and their links to what Americans eat today